So, here we are again. It’s time for that commercialized holiday we call Valentine’s Day, or Lover’s Day for those of us who don’t like St. Valentine. Being infected with HIV can be rough if you are looking for a little romance, but what can be rougher is being rejected because of it. Personally, I can say I was lucky to find my soulmate and husband but not many of us are that lucky. Many of us have now decided that we will only date other people living with HIV. I asked a couple of people why would they only date HIV-positive people and I heard people say that they like the fact that the person they are dating knows what they are going through, that they like not using a condom and that they feel more supported; all these factors were quite interesting to me. When I was dating, it was hard to disclose, but I did eventually. As I became more comfortable with my HIV status, it became easier and easier to disclose to my partners. Also, now that PrEP and U=U have come into play should we as HIV-positive people only date other HIV-positive people?

To read more Click Here or the link below

Posted by Justin B. Terry-Smith at 6:52 PM No comments: Links to this post

Even though the European Union stated that there has been a 20% decrease in HIV infection rates across Europe there is one country that has seen an increase.

Local HIV activists have been reported saying that they are not surprised by the statistics.  In Ireland, there seems to be a lack of accessibility for preventative measures.  The Irish government’s delayed in providing state funding for Pre-Exposure Prophylaxis (PrEP).  Which, according to the CDC can prevent the risk of HIV transmission up to 96%  Also, there has been a low rate of testing in the country. 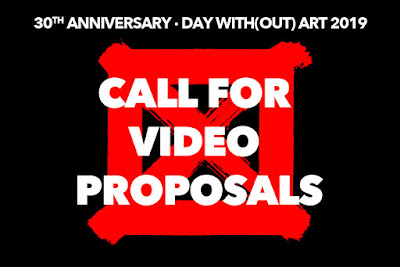 Call for Video Proposals: Day With(out) Art 2019 by Visual AIDS
SHARE
Visual AIDS invites artists and filmmakers to submit proposals for new film/video works to be produced and distributed to over 100 venues worldwide for the 30th annual Day With(out) Art. Visual AIDS utilizes art to fight AIDS by provoking dialogue, supporting HIV+ artists, and preserving a legacy, because AIDS is not over.

Deadline: March 15, 2019
Apply here
Since 1989, Visual AIDS has organized Day With(out) Art, coordinating a day of mourning and action at art museums, galleries, and non-profits across the world. Since 2015, Visual AIDS has commissioned short videos from artists and activists to be distributed and screened at over 100 venues worldwide on/around December 1, World AIDS Day.
For 2019, the 30th anniversary of Day With(out) Art, Visual AIDS is accepting proposals from artists and filmmakers for short film/video works responding to the ongoing epidemic. We welcome proposals from both emerging and established artists in a range of forms, including documentary, narrative, and experimental. Artists and filmmakers who are living with HIV are encouraged to apply.
Visual AIDS is particularly interested in:
Up to six selected artists will receive a $2,000 honorarium to produce a short video work (5–20 minutes) to be premiered at over 100 venues worldwide on December 1, 2019, the 30th anniversary of Day With(out) Art.
Visual AIDS will premiere these new video works at marquee screenings in New York City, Chicago, and Los Angeles in addition to coordinating over 100 screenings at museums, universities, and arts organizations worldwide. Videos will be made available for free online viewing after December 1, 2019.
Proposals will be reviewed by a jury including Kenyon Farrow (Senior Editor at The Body), Alexandra Juhasz (Chair of the Film Department, Brooklyn College), Tom Kalin (Artist and Professor, Film Department, Columbia University), Lucas Michael (Visual AIDS Artist+ Member and Board Member), and Lauren Zelaya (Assistant Curator, Public Programs, Brooklyn Museum).
Successful proposals will respond thoughtfully to the ongoing HIV/AIDS epidemic and demonstrate the artist’s ability to produce a final video by September 1, 2019. Artists will be expected to independently manage the production of their work while incorporating feedback from Visual AIDS staff throughout the process.
Past Day With(out) Art projects have featured video works by Thomas Allen Harris, Lyle Ashton Harris, Mykki Blanco, Cheryl Dunye, Rhys Ernst, Glen Fogel, Jim Hodges, Jim Hubbard, Derek Jackson / Hi Tiger, Tom Kalin, Kia LaBeija, Carol Leigh / Scarlot Harlot, Luna Luis Ortiz, Ray Navarro, Tiona Nekkia McClodden, My Barbarian, Brontez Purnell, Mark S. King, Ira Sachs, Ellen Spiro, Nelson Sullivan, Justin B. Terry-Smith, Julie Tolentino, Tourmaline, and James Wentzy. For more information on past Day With(out) Art projects, click here.
To apply, please submit a 250 word written proposal for a new film/video work, an artist statement, a work sample, and a CV through this Google Form.

If you have any questions about the application process, please email Kyle Croft, Day With(out) Art Project Manager at kcroft@visualaids.org.

As most of you know already that on my birthday my husband and I closed on 80 acres of land in New Mexico. So, let me explain exactly how this came to be. My husband is older than me and will be retiring in about 4 years.  We currently live in the DC Metropolitan area, I’m originally from Silver Spring MD and he is originally from Baltimore MD. That being said we do NOT want to retire here. We have traveled and will continue to travel, around the world.  We officially break ground on building the house in about 2 years. I currently work for the Federal Government and if you know anything about trying to get a new job in the Federal Government you know that it can take months even years to be able to find one and transfer. So, I’m looking for work in New Mexico now. The plan is for me to transfer over while the hubby stays here in Maryland until retirement. Then he will come to New Mexico when he retires. Of course, we will be traveling from Maryland to New Mexico to make sure we see each other.  It is going to be hell because of missing each other so much but this will have to happen. So, when I find a job in New Mexico I will move and keep an apartment.  When the house is built the hubby and I will keep the apartment in the downtown area.  The house will be built on the 80 acres of land and will be named Jewitchery Ranch.

When speaking of politics, it is a misconception that New Mexico is a “Red State”.  Politics in Maryland and New Mexico are interesting as well.  Both New Mexico and Maryland have voted red for a Governor but voted Blue for a President.  So, it will not be a big change when it comes to politics.  There are several LGBTQ orgs, bars and they do have pride parades as well.

Posted by Justin B. Terry-Smith at 6:44 PM 3 comments: Links to this post