Rosacea My Story
5 years ago, I made a blog video on my struggles with Rosacea.  If you missed the post let me first tell you about what Rosacea is a chronic disease and skin condition.  It causes inflammation and visible strained blood vessels in a person’s face.  In my face it caused redness and small, red, pus-filled bumps.  Eye problems. About half of the people who have rosacea also experience eye dryness, irritation and swollen, reddened eyelids.  I also have eye issues.  In some people, rosacea's eye symptoms precede the skin symptoms.  Rarely, rosacea can thicken the skin on the nose, causing the nose to appear bulbous (rhinophyma). This occurs more often in men than in women.

However, evidence appears to be mounting that an overabundance of Demodex may possibly trigger an immune response in people with rosacea, or that the inflammation may be caused by certain bacteria associated with the mites.  But every person carries these mites on their face.  But people with Rosacea have more mites on their facial skin surfaces than most.  Also let me make sure I tell you that Rosacea is NOT CONTAGIOUS.

Rosacea Triggers
Rosacea comes in outbreaks that are usually triggered by something.  Some of the triggers that cause Rosacea outbreaks are emotional stress, sun exposure, Drugs that dilate blood vessels, spicy food, hot drinks, including some blood pressure medications, hot and windy weather, exercise and alcohol consumption.

It hurt me so much physically and definitely hurt my self-esteem (mentally and emotionally).  I would sometimes not want to go to functions because I had an outbreak.  People would point it out as if I didn’t see it, it was somewhat horrifying.  I had to turn down photoshoots because I was ashamed of what I looked like.  Let’s just say photoshop became my friend.

Rosacea treatment that works
For 5 years I would get outbreaks.  At first, I used something called Metro Gel and it dried up my skin.  The Metro Gel was uncomfortable and wasn’t strong enough.  The second try at treatment was a topical medicine called Rosacea Treatment Gel that can be found over the counter.  This did help my Rosacea better than the Metro Gel ever did.  I was speaking with a friend of mine Debbie, and I had no idea that she suffered from Rosacea as well.  I asked how she did it because I had never seen her have an outbreak at all.  She told me about Oracea (Doxycycline) and that I should talk to my doctor about it.  So, I called my doctor asked if it would interfere with any of my HIV medication (Odefsey) and he said if should be fine.  You have to take a lot of water and decrease your exposure to the sun.  Currently, there is no cure for Rosacea BUT I haven’t had an outbreak since being on Oracea this year.  Since I started the medication and have not had any issues.


Sometimes people living with HIV have to worry about being susceptible to more infection, illness than people who are not infected with HIV Rosacea is no exception.
Posted by Justin B. Terry-Smith at 1:25 PM

I was invited to Speak on a Panel called, “HIV in the News” by Philadelphia FIGHT Community Health Centers for their End AIDS: The HIV Prevention and Outreach Summit during AIDS Education Month.  I found that it was very informative because there were different prospectives on the panel.  Cherri Gregg who is a reporter for KYW Newsradio and Christopher “Flood The Drummer” Norris CEO of Techbook Online were also on the panel.  and from Philadelphia FIGHT the moderator was good friend and colleague, Chip Lewis.  There were several questions that were fired at the panel.  Sensationalism played a big part of the conversation between the panelist.  I came from the place of making sure we as people who put news out on HIV put it out for the right reasons.  The opinion was very mixed.  Also, the story of Charlie Sheen came up and I said it was both good and bad.  With Charlie coming out (forcibly) of the HIV closet there was a spike in HIV testing.  But then as he became more vocal it became a shit storm, especially with him and his crazy doctor.  All in all, I loved the panel and we may have had different opinions on some issues we all respected each other because we know what an important role we play in the HIV realm. 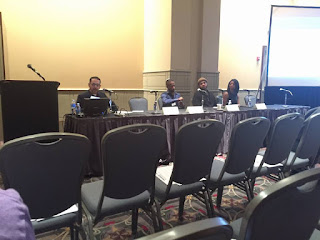 I wanted to not only focus on the panel, but also check on other things that the summit had to offer.  I walked about a looked at the portion of the AIDS Quilt that they had.  It seems to not matter what part, where or when I see a portion of the quilt it touches me and sometimes I cry.  It sometimes puts my own mortality in prospective.  Sometimes it makes me wonder if I will have a panel someday.  Of course, what I would like is that there is a cure for HIV and I live long enough to not only see it but take it.  A lot of us that work in the world of HIV wouldn’t know what to do next if there a cure but until we get to 0 infections we still have a lot of work ahead of us.  Another highlight was meeting Ryan White’s mother, Jeanne White-Ginder.  I had never formally met her but I had always wanted to.  I have heard her speak on some occasions.  Every time she speaks at an event she played a video and it always touches me.  It a video of her son Ryan White and the late Michael Jackson's song, Gone to Soon. 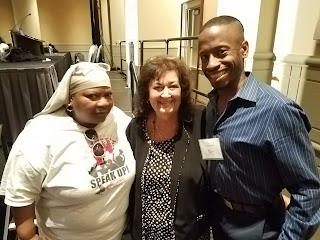 Ryan White was the poster child for AIDS when he challenged his local school when they ban him from going to school after his diagnosis was widely known.  Important dates on White’s activism and legal battles are on June 30 Superintendent James O. Smith denies White admittance to school.  Aug. 26th First day of school. White is allowed to listen to his classes via telephone.  Oct. 2School principal upholds decision to prohibit White. Nov. 25 Indiana Department of Education rules that White must be admitted.  Dec. 17 The school board votes 7–0 to appeal the ruling.  Feb. 6 Indiana DOE again rules White can attend school, after inspection by Howard County health officers.  Feb. 13 Howard County health officer determines White is fit for school.  Feb. 19 Howard County judge refuses to issue an injunction against White. Feb. 21 White returns to school. A different judge grants a restraining order that afternoon to again bar him. Mar. 2 White's opponents hold an auction in the school gymnasium to raise money to keep White out. April 9 White's case is presented in Circuit Court. April 10 Circuit Court Judge Jack R. O'Neill dissolves restraining order. White returns to school.  July 18 Indiana Court of Appeals declines to hear any further appeals.
Posted by Justin B. Terry-Smith at 1:12 PM