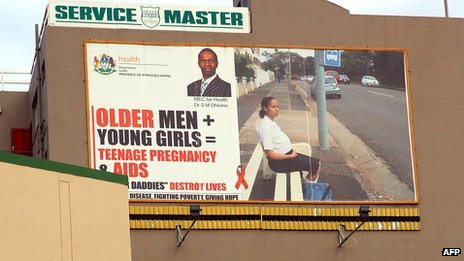 What do you think?  Helpful or Stigmatizing?

Motsoaledi was put into off in 2009 by Former South African President Thabo Mbeki.  Mbeki was instrumental in brainwashing a lot of citizens to believe that HIV does not cause AIDS, because he himself was brainwashed by HIV Denialist and/or Dissidents.  Mbeki also claimed that his administration did not have the resources to send aide to all South Africans that were HIV positive.
Motsoaledi stated that he has treated pregnant girls that range from ages 10 to 14 who were also HIV positive.  After he took office there were rates of infection that were first greater than 678,000 but climbed to 1.5 million.  In 2012 alone 260,000 perished from AIDS, about half of which were from South Africa.
Posted by Justin B. Terry-Smith at 7:07 PM Links to this post