In Orlando Florida about 2am on 6/12/2016 a gunman entered the (Lesbian, Gay, Bi-sexual and Transgender) LGBT club called the Pulse and opened fire killing approximately 50 patrons.  Just hours after the mass shooting Texas Lt Gov. Dan Patrick an avid anti-LGBT campaigner sent out a tweet saying, "Do not be deceived: God cannot be mocked. A man reaps what he sows." just hours after a mass shooting, which is from the Bible and found in Galatians 6:7.  Representatives for the lieutenant governor said the post were prescheduled and that Patrick and other statewide officials usually share Bible verses on social media on Sunday mornings. 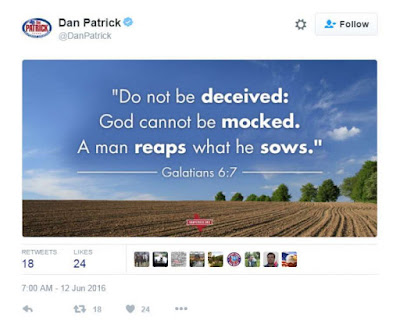 The tweet was deleted around 11:00 a.m. Sunday.  The Texas' Democratic Party responded by calling on Patrick to apologize immediately.  Patrick campaign spokesman Allen Blakemore strongly denied the tweet was in any way related to the Orlando shooting and that Patrick was currently out of the country.

Whether accident or not, why has it taken this long to get an apology from him? What is the hold up?  You are a major _ _ _ hole, no doubt.
Posted by Justin B. Terry-Smith at 2:03 PM