U.S. federal health agencies on Tuesday recommended pausing the use of Johnson & Johnson's COVID-19 vaccine for at least a few days after six women under age 50 developed rare blood clots after receiving the shot, dealing a fresh setback to efforts to tackle the pandemic.

Johnson & Johnson (J&J) said it would delay rollout of the vaccine to Europe, a week after regulators there said they were reviewing rare blood clots in four recipients of the shot in the United States.

Acting U.S. Food and Drug Administration Commissioner Janet Woodcock said the agency expected the pause to be a matter of days, and was aimed at providing information to healthcare providers on how to diagnose and treat the clots.

The moves come after European regulators said earlier this month they had found a possible link between AstraZeneca's COVID-19 vaccine and a similar rare blood clotting problem that led to a small number of deaths.

J&J's single-dose shot and AstraZeneca's low-cost vaccine are seen as vital weapons in the fight against a pandemic that has claimed more than three million lives. But in the United States, vaccines from Moderna Inc and Pfizer Inc/BioNTech SE have accounted the vast majority of vaccinations so far.

Immunology experts echoed U.S. officials in underscoring that the risk posed by the J&J vaccine appeared extremely low, and it remained a valuable tool against the risks of COVID-19.

"Even if causally linked to the vaccine: 6 cases with about 7 million doses ... is not something to panic about," Dr. Amesh Adalja, an infectious disease expert at the Johns Hopkins Center for Health Security in Baltimore, said in an email, noting that the risk appears lower than the risk of clots from oral contraceptives.

"People are asking me if they should cancel their J&J vaccine appointments and I have told them not to but I know many will and this will stall progress in controlling the pandemic," he added.

The FDA said there had been one reported death from the rare blood clotting condition among recipients of the J&J vaccine, while another person was in a critical condition.

FDA official Peter Marks said it was "plainly obvious" the J&J cases were "very similar" to the AstraZeneca ones.

However, officials said there had been no similar blood clot cases reported among recipients of the Moderna or Pfizer/BioNTech vaccines, which use a different technology.

The White House said the J&J vaccine pause would not have a "significant" impact on its plan to administer about three million shots per day and a total of 200 million before President Joe Biden's 100th day in office.

Marks said part of the reason for the pause was to warn doctors that administering the standard treatments for clots can cause tremendous harm, or be fatal.

J&J's vaccine rollout has been limited by production issues. As of April 12, more than 6.8 million doses of the J&J vaccine had been administered in the United States, representing about one reported blood clot case per million people.

An advisory committee to the U.S. Centers for Disease Control and Prevention (CDC) will meet on Wednesday to review the cases, and the FDA will review the analysis, the agencies said in a statement.

All six cases involved women between the ages of 18 and 48, with symptoms occurring six to 13 days after vaccination. The FDA said symptoms can arise three weeks after the shot and include severe headache, abdominal pain, leg pain or shortness of breath.

In the cases, a type of blood clot called cerebral venous sinus thrombosis (CVST) was seen in combination with low levels of blood platelets, or thrombocytopenia.

J&J, whose shares were down 2%, said it was working closely with regulators and noted no clear causal relationship had been established between the clots and its vaccine.

"To put this into perspective, it's similar to the chance of being struck by lightning in any given year in the UK. On the other hand, the risks from COVID-19 are substantial," said Ian Douglas from the London School of Hygiene & Tropical Medicine.

"If all 6.8 million people who've received the J&J vaccine in the U.S. were infected with the virus, several thousand would likely die and many more, including younger adults, would experience serious and long-lasting after effects."

The J&J and AstraZeneca vaccines both use an adenovirus vector - a harmless cold virus - to deliver instructions for  human cells to produce a protein found on the surface of the coronavirus, spurring the immune system to recognize and attack the actual virus.

The European Medicines Agency (EMA) continues to recommend  use of AstraZeneca's COVID-19 vaccine, saying the benefits outweigh the risks. Several EU countries, however, have limited its use to certain age groups.

As of April 4, the EMA said 169 cases of CVST and 53 of splanchnic vein thrombosis had been reported after vaccination with the AstraZeneca shot. About 34 million people had been given the shot in Europe by then.

J&J only began delivering its COVID-19 vaccine to European Union countries this week.

S1:E10- The One About Two Black Veterans and Dads in a Non-Monogamous Relationship The Story of Justin & Philip

"Watch two Black veterans share their love journey: how they adopted their LGBTQ kids, how they loved while in the military under DADT (Don't Ask, Don't Tell), and how they thrive as a non-monogamous couple. If you've ever wondered about open relationships, this right here is a Master Class in non-traditional love. Warning: these series are not made for everyone. They are made for the very few special people who need to see them. Hence if these stories come to you, please care for them". Kehinde Bademosi #HappinessHis

See see the interview click here of the link below

We observed National Black HIV/AIDS Awareness Day. This is an opportunity to increase awareness about HIV education, testing, and care and treatment services among the Black community, as well as highlight the work being here at Southwest Center.

Today we launch a video created by the Black Lives Matter Coalition at Southwest Center featuring four of our staff members:

HIV activist and creator of "Justin's HIV Journal" Justin B Terry Smith is a featured guest on the show.  www.JustinTerrySmith.com

Also featured in our video are special BLM Bags available by request at SW Center with condoms, lube and more from www.NicePackage.org

for the month of February.

"Releasing of Episode #13- HIV/Aids with Justin Terry-Smith - Drph. We are excited about 2021 Podcasts and have an amazing line up.

This podcast is in honor of all our Brothers and Sisters that we have lost in our community to Aids/HIV. We pause during this podcast for a moment of silence in their honor. We also want to set aside space in honor of National Black HIV/AIDS Awareness Day Sunday, February 7th, 2021.

What a honor and privilege it was to host Justin ty for your time and service Justin.

"Although the Lifestyle may be therapeutic, it is not meant to be therapy" ~ Kat 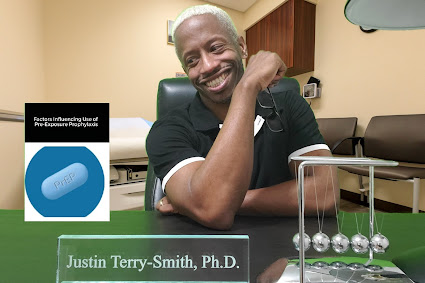 ANNOUNCEMENT (ANOTHER NEW BOOK?!?): Happy New Year EVERYONE, I know it's the New Year but wanted to make the announcement that I'm debuting another book called, "Factors Influencing Use of Pre-Exposure Prophylaxis (PrEP)", which can be found on Amazon.com. It is a cross-sectional study that examines the association between education level, employment status, number of sexual partners, access to health resources, and the use of PrEP. I hope all of you have a Happy New Year and hopefully 2021 will be a better one for us all. Please follow the link below to check it out